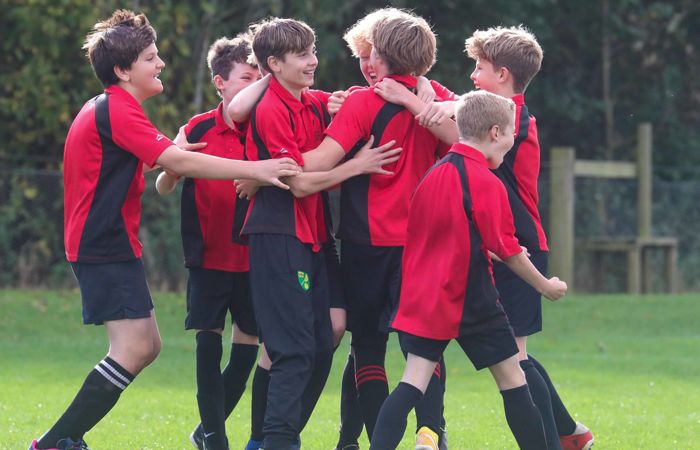 On October 20th and 21st, Inspiration Trust were delighted to launch their first of many, inter-trust sporting event. The event included over 630 students competing in a football tournament over two days at Norwich CSF's fantastic venue, The Nest.

The competition took place over two days and involved nine Secondary Schools from our region; Cromer Academy, East Point Academy, Great Yarmouth Charter Academy, Hethersett Academy, Hewett Academy, King Edward VII Academy, Jane Austen College, Thetford Academy and Wayland Academy. It included both boys and girls from throughout Years 7 - 10, with over 80 matches being played per day. The weather did not dampen spirits and the games were all played in an enjoyable but competitive atmosphere. The competition was supported by Norfolk FA Referees Association, with 8 fantastic officials a day who all acknowledged what a pleasure it was to officiate and how polite and respectful Inspiration Trust students were.

This was the first competitive sport a large majority of students had experienced in over twenty months and the excitement and pride in representing their school was palpable. The focus of this, and our other six Trust sporting events this academic year, is to give all our pupils an opportunity to perform and excel in competitive sport, promoting community within our schools and to experience competing in fantastic sport-specific venues.

Huge thank you to Ian Thornton, Jackie Thornton, Kat Jarvis and the staff at The Nest for their support in hosting this event and to our sponsor Oli Smith, Manager of Wensum Print.

“We loved hosting and working with the Inspiration Trust for the recent tournament. It gives us such pride to see the community enjoying the physical and mental benefits of taking part in sport here at The Nest. It was wonderful that so many boys and girls were able to enjoy the facilities and we look forward to hosting again in the future."

"We were proud to sponsor the football tournament for schools and academies within the inspiration trust. We produce a wide range of printing across the trust but this project was particularly rewarding to work on as it allowed us to see how much it meant to the students first hand. Huge congratulations to the staff, students and all involved. We hope that everyone enjoyed the tournament as much as we did."

We look forward to continuing our inter-trust sports competition with our swimming gala at UEA's sports park on Tuesday 23rd November.